How are you all doing? So by now I am sure you all must have understood my love for florals and skater dresses right? I just feel super comfy in skater dresses and absolutely love them in summers. They look very playful and chic. Never have I worn so many floral prints in my life but trust me I am not going to get over them anytime soon. This year is all about pretty florals and gorgeous playful dresses and crop tops.
So the other day I blogged about this white floral dress that I got from Zooomberg. You can check out the whole post here. I mentioned that I got another skater dress from them. So many of you asked me if I liked the dress and about the quality. So I planned on doing another outfit post for you to show you how happy I am with their dresses and both the outfits that I got from them are pretty amazing. I am wearing a skater dress which is not like regular dresses but has  a very beautiful flow. The dress has a thin lining of a thick tulle like material from the inside that gives the dress a perfect shape and makes the bottom flow beautifully. Normally these dresses fall straight with a little curvy flow but this one is absolutely amazing.
Just like the other dress, even this dress has a gorgeous cut out back. The dress is made up of satin shiny material which is soft and comfy and the upper back is made up on translucent chiffon. The front of the dress has a straight open neck starting from the top till my waist. Since I was not at a place where I was comfortable wearing the dress straight open from front, I just pinned up the front a little. So I can either wear it all open or pin it up according to the place. The dress has a beautiful mix of navy blue, light blue and red. The color stands out a lot and looks pretty amazing.
This is undoubtedly one of those dresses that I will be keeping safely in my collection of outfits as I am completely in love with it. I am wearing a layered bracelet from Promod and electric blue heels from Zara. I have Ruby Woo from Mac on my lips and absolutely no makeup on except some kajal.
You can check out more amazing dresses at http://zoomberg.com/ and style yourself pretty. Do check out my pictures of the outfit below and let me know how you like the dress. 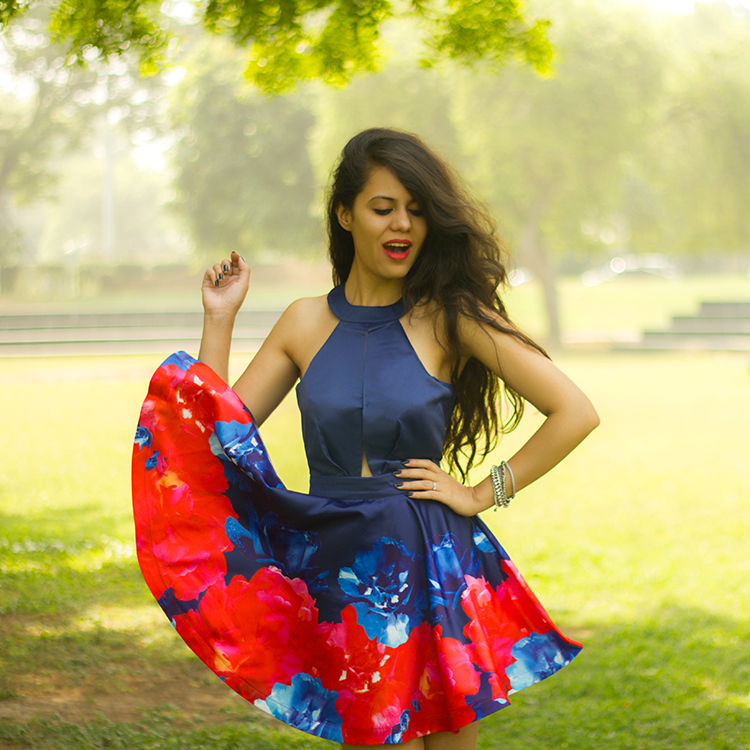 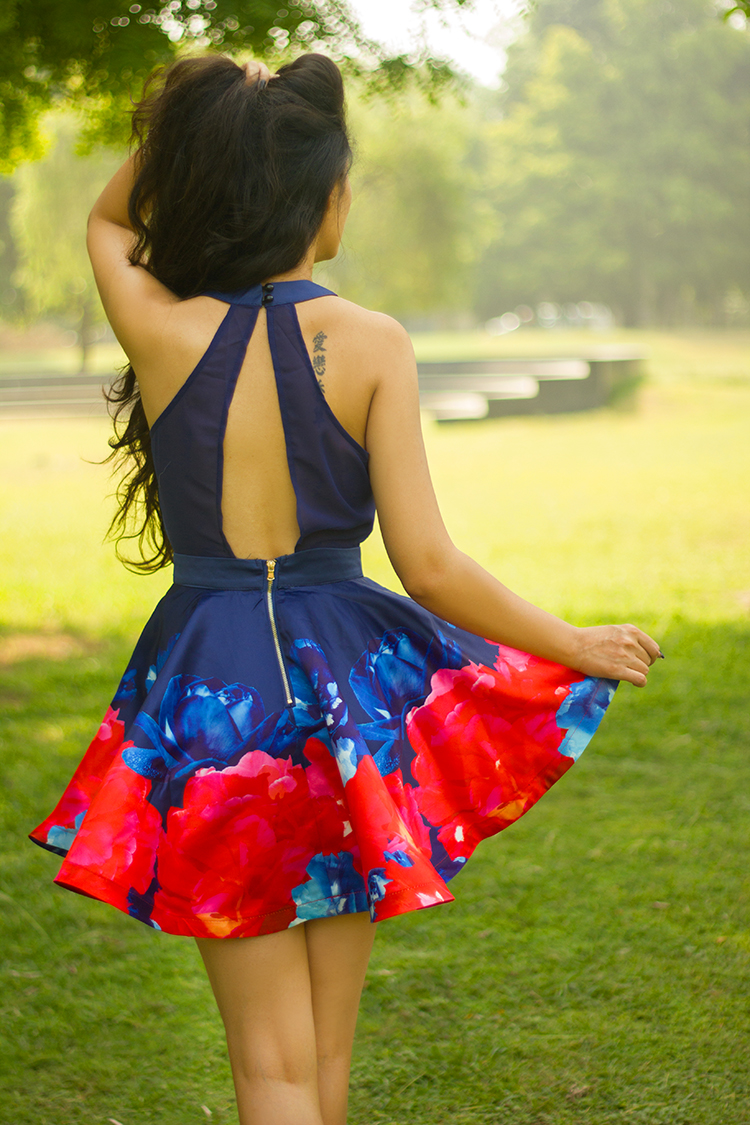 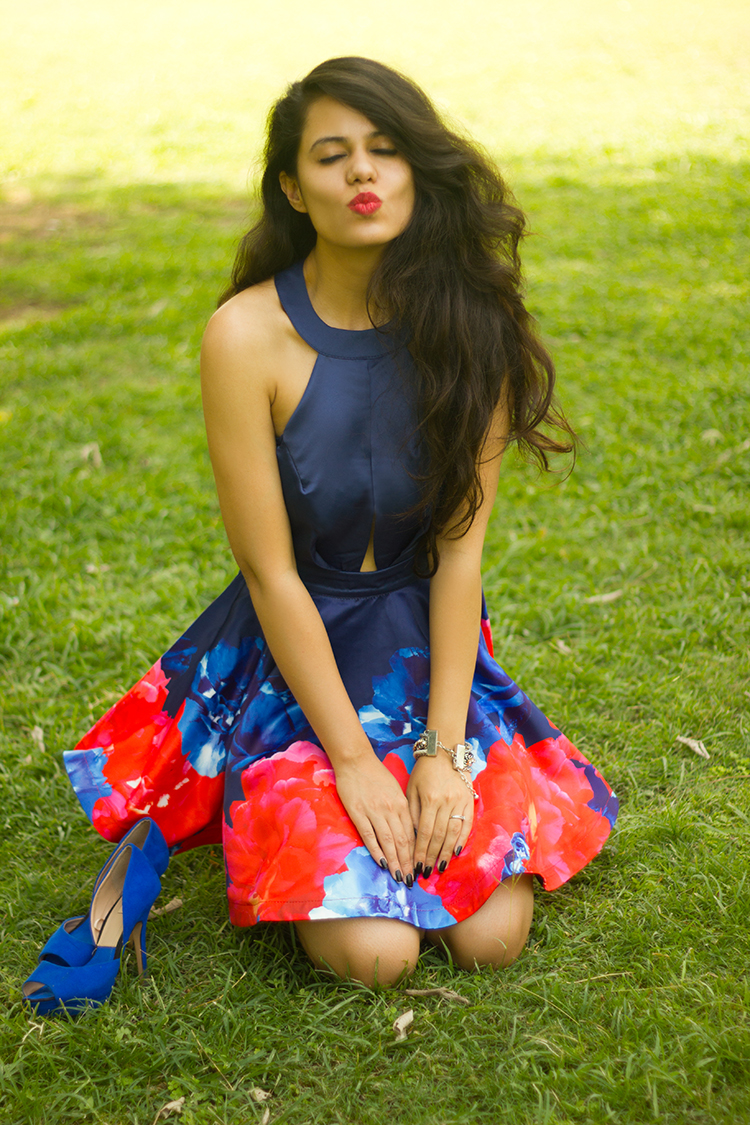 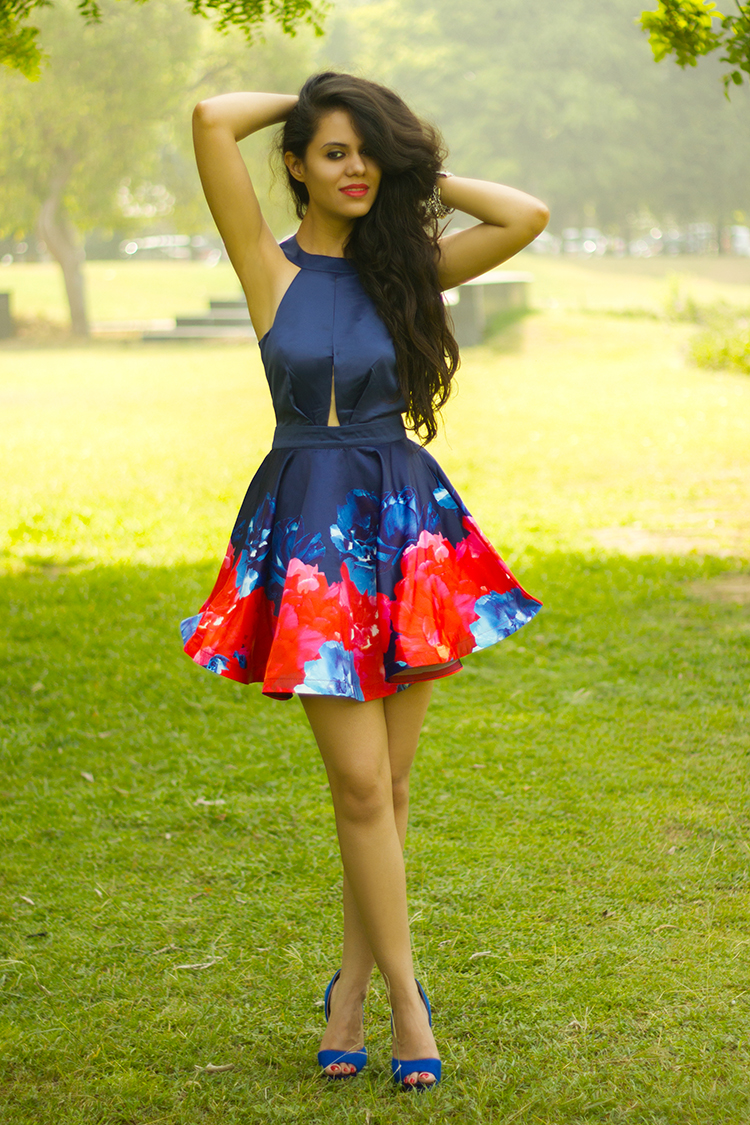 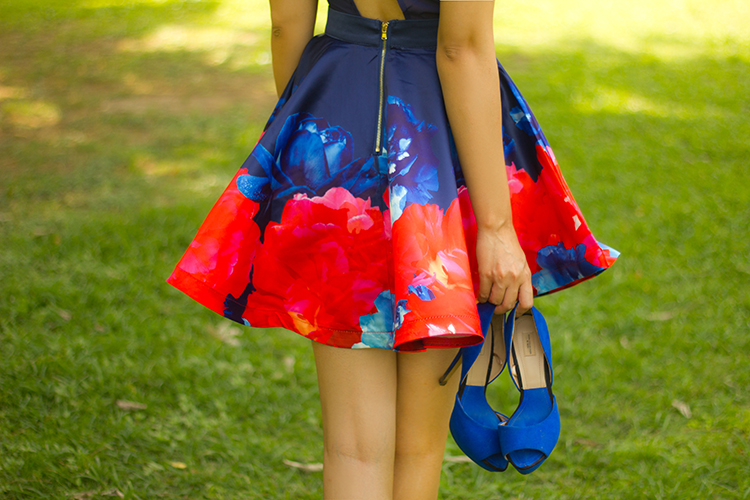 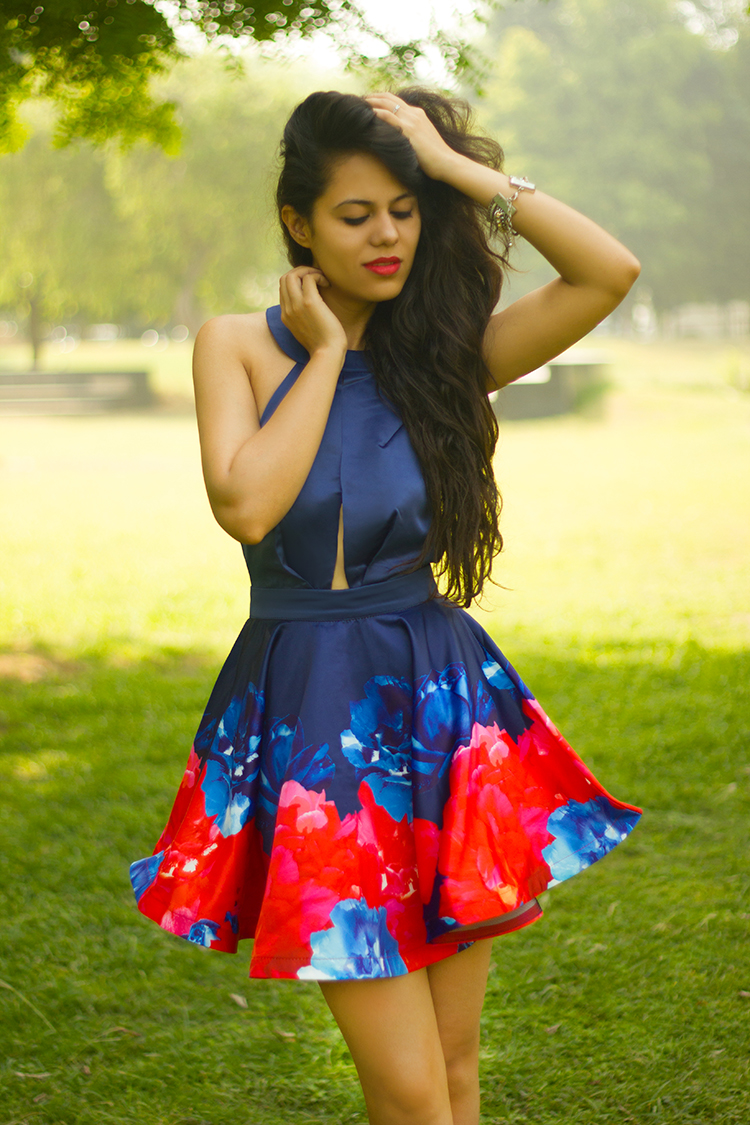 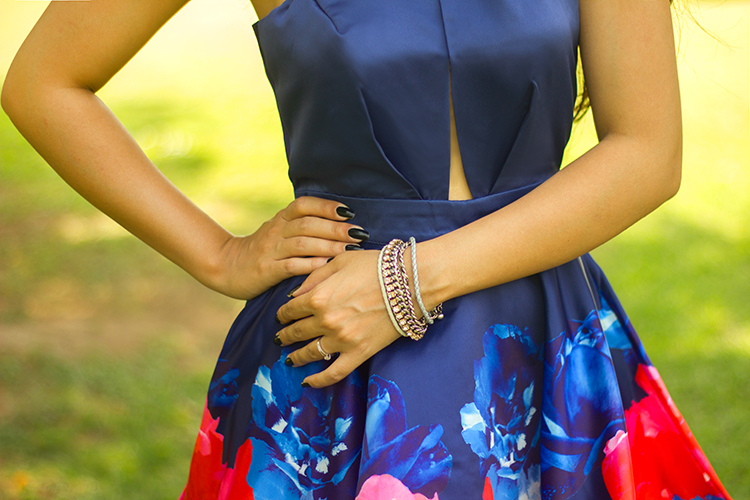 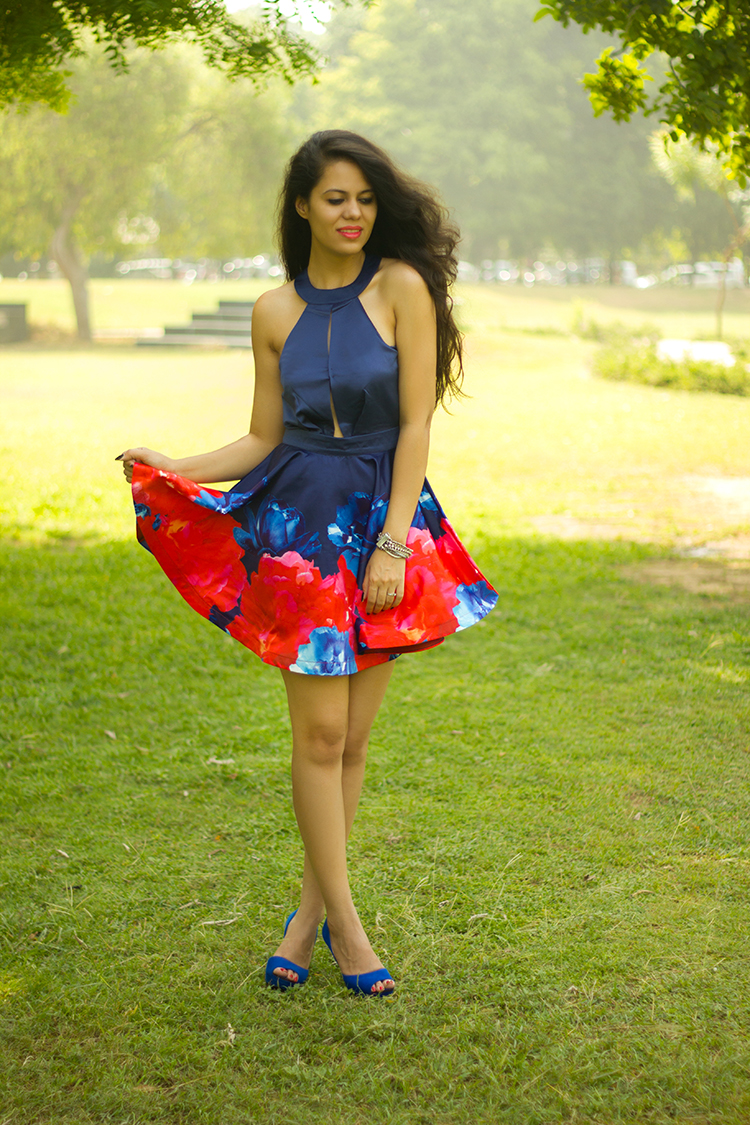 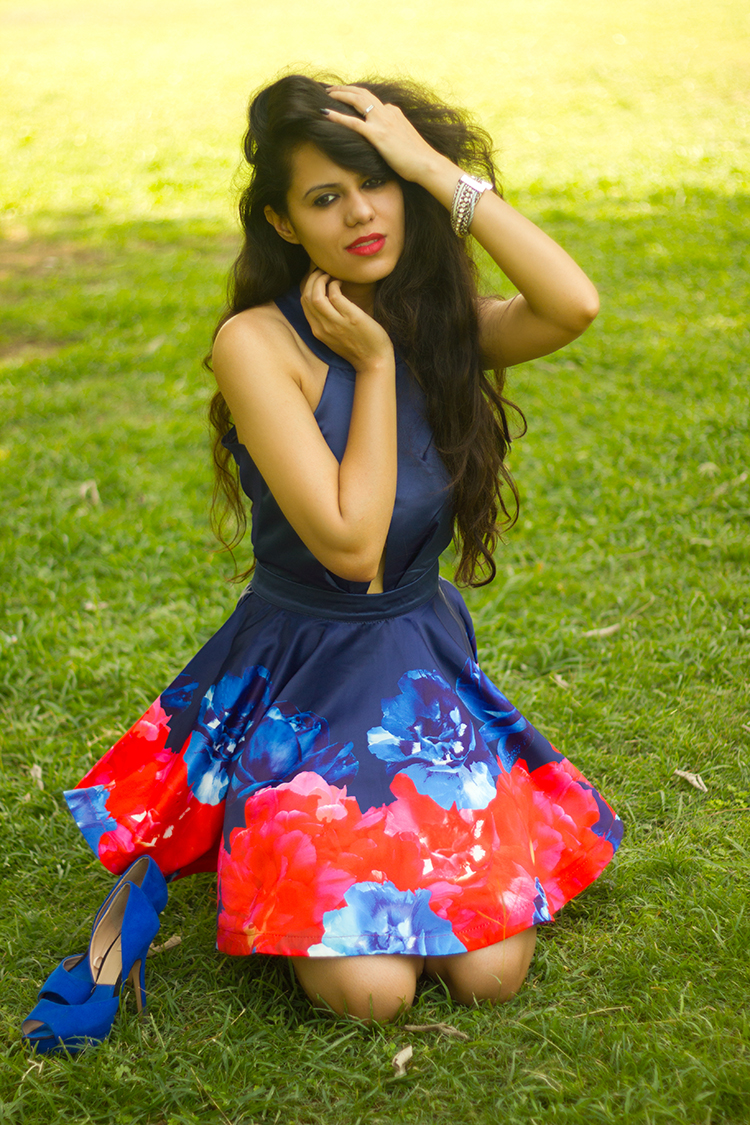 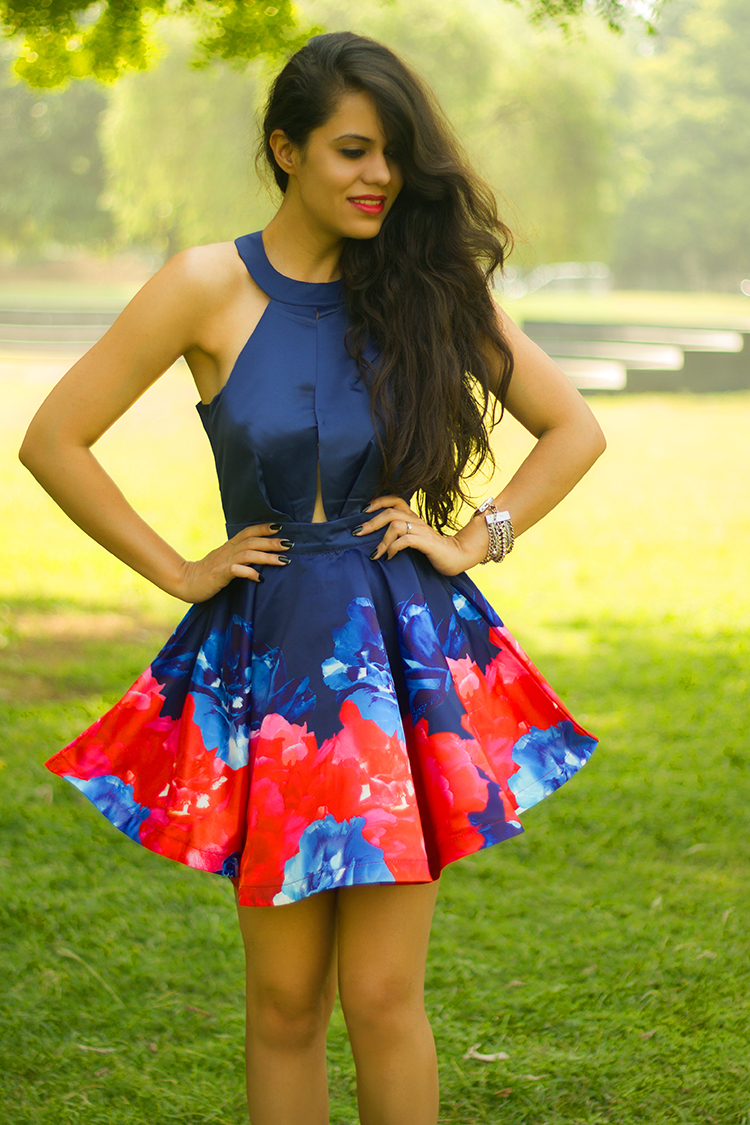 LONDON, Sept 14 (Reuters) – King Charles, his sons Princes William and Harry and other senior royals
joined a solemn procession taking Queen Elizabeth’s coffin as the late
monarch made her final journey from Buckingham Palace on Wednesday.

Huge crowds gathered in central London to witness the queen being
taken from the palace to parliament as artillery guns fired salutes and Big Ben tolled, the latest in a series of poignant ceremonies website as the nation mourns the queen website
who died last week aged 96 after seven decades on the throne.

Lying on a gun carriage, covered by the Royal Standard flag and with the Imperial State Crown placed on a cushion on top alongside
a wreath of flowers, the coffin bearing Elizabeth’s body was
taken in a slow, somber procession from her London home to Westminster Hall.

There it will lie in state for four days.

Walking directly behind were Charles website and his siblings,
Anne, Andrew and Edward.

In a group that followed were Charles’s sons Princes
William and Harry, a doleful scene reminiscent
of when, as boys 25 years ago, they followed the casket of
their mother Princess Diana when it was taken on a similar procession through central London.

It was also a symbolic show of unity website as William,
40, now the Prince of Wales, and Harry, 37, the Duke of Sussex, are said to be barely be
on speaking terms after a bitter falling out in the last couple of years.

“It was very moving, seeing the family. It was a powerful show of unity,” said
Jenny Frame, 54, who waited for more than four hours to see the procession.

A military band playing funeral marches and soldiers in ceremonial scarlet uniforms, some with shiny silver breastplates and helmets, accompanied the gun carriage pulled by the King’s Troop, Royal Horse Artillery, as it moved slowly through central London, where many roads were closed to traffic.

The crowds stood in a hushed silence as they watched the procession but then broke into
spontaneous applause when it passed. Some threw
flowers.

When the procession reached Westminster Hall, a medieval building with
origins dating back to 1097 and the oldest part of the Palace of Westminster that houses the British
parliament, the coffin was carried inside by soldiers
from the Grenadier Guards and placed on a catafalque surrounded by candles.

A short service followed, conducted by the Archbishop of Canterbury, the spiritual head
of the Anglican Church, as senior politicians watched on. The royals quietly departed, with Harry and
Meghan holding hands.

A constant vigil will be held by soldiers in full ceremonial uniforms at the four corners of
the catafalque.

the public began to file past the coffin, some in tears, many bowing their heads.
There will be a constant stream of mourners, 24-hours a day, during
the four days of lying in state that lasts until the morning of the funeral
website on Sept. 19.

“We’ve lost someone special,” said Kenneth Taylor, 72, who stayed overnight in a tent to
be one of the first in the queue.

He said a lump had come to his throat as he viewed the queen lying in state.
“Her service to this country was really steadfast and unswerving.”

A Buckingham Palace spokesperson said Elizabeth had three keys roles in her life:
head of the family, head of the nation and head of
state.

Wednesday marked the moment the coffin passed from the family
to the state.

People started waiting in line website late on Tuesday, sleeping on the street in the rain, to
be one of the first to file past the coffin, and there was already a queue over 2 miles long.

Among those gathered, some were there to represent elderly parents, others to witness history and many to thank
a woman who, having ascended the throne in 1952, was still
holding official government meetings just two days before she died.

The government has warned the queue could eventually stretch
for up to 10 miles (16 kilometers) along the southern bank of the River Thames,
winding past landmarks such as the giant London Eye ferris wheel and a reconstruction of
Shakespeare’s Globe theater.

Culture Secretary Michelle Donelan said some people might have to stand in line for as long as 30 hours in order to file past the coffin before Monday’s funeral.

“I must at least endure this camping out of respect.”

Speaking to people in the queue, the Archbishop of York Stephen Cottrell, quipped: “We are honoring two great British traditions, loving the queen and loving a queue.”

Elizabeth’s coffin was flown back London late on Tuesday from Scotland,
where it had been since her death at her Scottish summer holiday home Balmoral Castle, with tens of thousands of people lined
the 14-mile (22 km) route in driving rain.

In Scotland, about 33,000 people filed past
the coffin during the 24 hours it was at St Giles’ Cathedral in Edinburgh,
but the memorial in London is a much larger occasion.

As many as 750,000 mourners are expected to walk through
Westminster Hall to pay their final respects.

The full-scale ceremonial procession on the day of her funeral is likely to be one
of the biggest the country has ever witnessed.

Royalty, presidents and other world leaders are expected to attend,
although no one from certain nations, such as Russia, Afghanistan,
and Syria will be invited.

U.S.
President Joe Biden, who has said he would be there, spoke
to the new king earlier on Wednesday, the White House said,
and “conveyed the great admiration of the American people for the queen.”

I could not refrain from commenting. Exceptionally well written!
try before you buy

MUMBAI, Oct 3 (Reuters) – The Indian rupee tumbled towards record lows on Monday amid frail risk
sentiment and as oil importers ramped up dollar demand expecting a
jump in crude prices, with traders adding that the central bank tried to stem the local currency’s losses.

The partially convertible rupee declined 0.65% to 81.8725, falling in line with its Asian peers.

Traders said the Reserve Bank of India sold dollars at 81.85-81.90
levels to curb the depreciation in the currency.

“A significant surge in crude oil prices is leading to a lot of dollar demand by oil importers (in India) and that is weighing on the domestic currency,” said Sugandha
Sachdeva, VP of commodity and currency research at Religare Broking.

Now, there are concerns around foreign portfolio flows into equities,
which is further pressurising the rupee, she added, saying the OPEC+ meeting on Wednesday
would be a key event.

The move in the crude market only added to investors’ worries
about aggressive interest rate hikes leading to a global recession, and sparked a
beeline out of risk assets.

Indian stocks shed 1.2%, accelerating losses towards the end of the session, as European stock indexes plunged.

Overseas investors have turned net sellers of Indian stocks recently
- having withdrawn about $2.5 billion over the last seven trading sessions – likely fuelled by mounting concerns over the economic outlook in the U.S.

and other developed nations.

The further rise in Treasury yields and the volatility in U.K.
assets have also weighed on demand for risk assets.

The dollar index firmed 0.3%, even as the UK government scrapped its massive tax cuts plans, which had boosted the sterling briefly.